Shaw and Partners is excited to announce its latest charitable initiative. In partnership with Gotcha4Life, Shaw and Partners has signed on as naming rights sponsor of the Shaw and Partners Atlantic Crew, whereby four mates will take to the high seas to compete in The Talisker Whisky Atlantic Challenge to raise awareness and funds for mental health in Australia.

The Talisker Whisky Atlantic Challenge is the premier event in ocean rowing racing, spanning more than 5,000 kilometres across the rough Atlantic Ocean from La Gomera, Canary Island to English Harbour, Antigua. The team, comprised of Sam Horsley, James Samuels, Rob Wells and Louis Hugh-Jones have set three objectives; win the race in under 35 days, be the youngest Australian four to row the Atlantic and raise $500,000 for Gotcha4Life.

Gotcha4Life founder Gus Worland’s vision is zero suicide. “… that’s our vision. Simple as that. I want a society in which everyone has a Gotcha4Life mate. That go-to person who you can open up to and rely on about anything.” Gotcha4Life promotes open and honest lines of communication, pushing to address Australia’s troubling suicide statistics. For more information on Gotcha4Life please visit www.gotcha4life.org.

Setting off in December 2021, the Shaw and Partners Atlantic Crew will row shifts day and night in tandem - 2 hours on, 2 hours off, 24 hours a day - pushing the boundaries of physical and mental endurance. They will row in the new year against more than 30 fiercely competitive crews, braving rough waves, dehydration and exhaustion. Over the duration of the race, each team will take over 1.5 million strokes and will burn in excess of 10,000 calories per day.

If you missed the weekend’s action on Channel 7’s Sunrise, tune in below to hear from James Samuels and Sam Horsley. For more information on the Shaw and Partners Foundation please visit https://www.shawandpartners.com.au/community/shaw-and-partners-foundation. 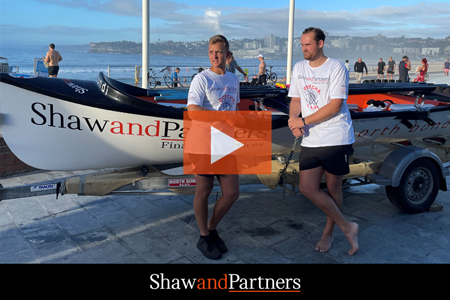